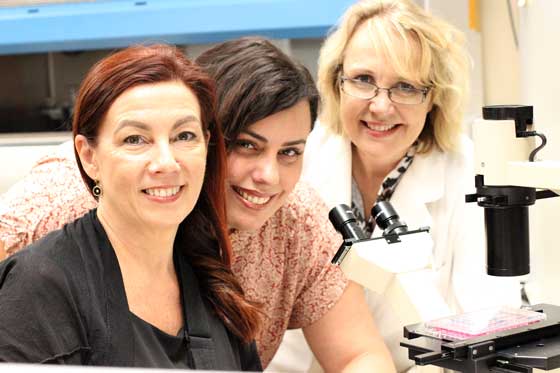 Collaborating for a Cure

Following a $40,000 donation from Hope4Cure Foundation, Calvary Mater Newcastle launched a special research grant for its researchers to help bolster research in ovarian and gynaecological cancer.

Dr Jennette Sakoff, Chief Hospital Scientist Medical Oncology, Calvary Mater Newcastle, and her collaborator Prof Janice Aldrich-Wright from Western Sydney University, are the recipients of the inaugural Hope4Cure Grant Fund. The funds will go towards a project to pursue the development of new platinum-based molecules for the treatment of ovarian cancer.

Dr Jennette Sakoff, explains, “Platinum-based compounds have been used for the treatment of cancer since the 1960’s. These agents kill cancer cells by binding to DNA. However, they do have side-effects such as kidney and nerve toxicity, and cancers do become resistant to their use over time. To overcome these problems we need to discover agents that function differently and which only target the cancer cells and not healthy cells.

“The team has discovered a unique class of platinum-based compounds that are different to the standard platinum-based intravenous chemotherapy treatments such as cisplatin, carboplatin or oxaliplatin. These compounds are very selective at targeting ovarian cancer cells. Indeed, they are 1,000 times more potent at killing ovarian cancer cells grown in the laboratory compared with non-cancer cells and cells derived from other tumour types. The funds will be used to understand why this occurs and how can we exploit this for the development of better treatments for ovarian cancer.”

Sarah Frith, Co-Founder, Hope4Cure Foundation, said, “We are so pleased to be able to support local researchers make advancements in ovarian and gynaecological cancer. We are fortunate to have the unwavering support of the local community, who have supported our fundraisers. Last year, 100 per cent of the funds raised from our Christmas in July event has contributed to the Hope4Cure Grant Fund, totalling $40,000. We’d like to offer our sincere gratitude to the attendees at the event, the wonderful businesses who supported by providing prizes and auction items, and to everyone who made the night a huge success and have enabled this important grant to be established.”

February is Ovarian Cancer Awareness Month. It is held each year in Australia to raise awareness of the signs and symptoms of ovarian cancer, to share the stories of real women affected by the disease, to highlight the risk factors for ovarian cancer and educate Australians on ovarian cancer diagnosis and treatment.

Leenane Templeton established the Hope4Cure foundation after the loss of Hope4Cure founder, Sarah Frith’s, cousin Trish from Ovarian Cancer in 2015 after a late diagnosis. The foundation’s purpose is to support locals fighting gynaecological cancers by raising funds for research and clinical trials, as well as raising awareness to assist with early diagnosis.