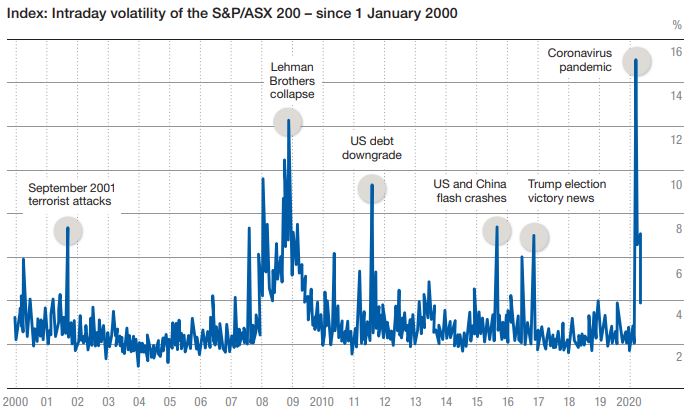 Sharemarkets are the most volatile they’ve been in the past 20 years. Increased uncertainty, fear, forced and panic selling, as well as reduced liquidity, are all contributing factors to currently elevated levels of volatility.

A simple measure using intraday price fluctuations can be used to understand the extent of the current volatility in the market. The graph below charts intraday volatility since 2000, with the average being 2.8%. In March 2020, the intraday volatility however, was greater than at any other time and significantly exceeded the peaks during the period of the
Global Financial Crisis (GFC) between 2007 and 2009.

In March this year there were nine trading days with volatility above 10%, seven of them consecutive. During the GFC there were only four days in total with greater than 10% intraday volatility and no consecutive trading days. Recent volatility has far exceeded other extreme world events which are represented by the peaks in the chart below, including the September 2001 terrorist attacks, the collapse of Lehman Brothers during the GFC, Black Monday on 8 August 2011 (which followed the credit rating downgrade of US sovereign debt), the US and Chinese flash market crashes of 24 August 2015 and news on Donald Trump’s likely election victory on 9 November 2015.

Despite having fallen from its peaks, volatility currently remains about twice the average.

With elevated volatility, you could be forgiven for looking at this graph and wanting to run for the hills. But the reality is that volatility is your friend when investing for the long term – with the at times extreme fluctuations in price presenting excellent (long-term) buying opportunities.

The causes of the current bout of volatility are certainly different and it is unclear if they warrant the elevated levels of volatility we’ve seen relative to other cycles. But in each of the previous bouts of market volatility, significant opportunities were presented to long–term, patient investors. It is hard to believe that this will be any different today.

Looking for an investment strategy or need help from a financial planning professional? Call the LT team to see how we can help.